The Android Software Development Kit (SDK) is a collection of programming tools for developing, building, and debugging Android applications. It is primarily focused on all-Java programs that can run unchanged on all Android cpu architectures. For programming in native-compiled languages like C and C++, see the NDK add-on tool set.

Using the SDK and SDK-generated apps is the same for MIPS-based devices as for Arm- or x86-based Android devices. The following instructions assume that you are already familiar with using these tools to build and run Java apps for Arm devices.

All three versions include the SDK Manager, AVD Manager, and emulator described below.

Installing the stand-alone SDK Tools, Android Studio, or Eclipse ADT is the same for MIPS development as for Arm and x86.

Building an app is the same for all Android target architectures. The same Dalvik/dex binary code is generated for them all. That code is optimized for the specific cpu architecture after it is delivered to the user’s device.

The SDK automatically downloads recent Android system images for 32-bit Arm devices. But the system images for MIPS or MIPS64 virtual devices are not downloaded until you ask for them. You must do that before setting up the AVDs for emulated MIPS runs. 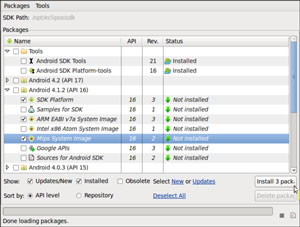