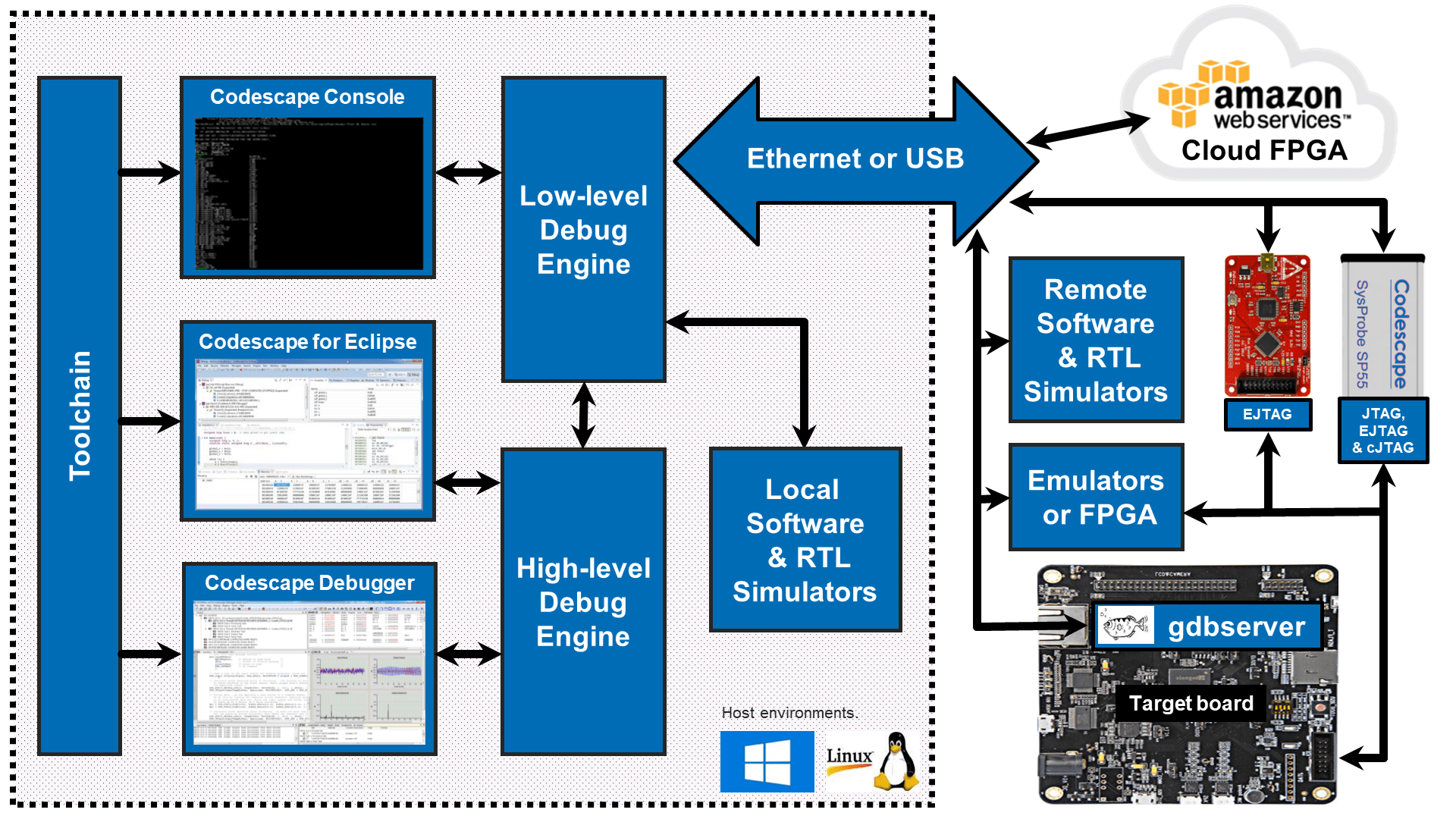 MIPS provides a complete portfolio of development tools to address all stages of product development. Whether you require state-of-the-art compiler technology, embedded RTOS and Linux support, EJTAG probes, or development boards, MIPS has the tools and software to address your development needs. A complete development environment consists of multiple components including but not limited to:

There are also a number of third party vendors tools which support MIPS processors.

Further details can be found in individual pages below.

Codescape MIPS SDK is a highly integrated suite of tools to facilitate silicon bring-up, debug, and development of bare metal and GNU Linux applications on MIPS simulators and development boards.

MIPS offers a wide range of solutions for initializing MIPS cores and facilitating debugging. These include open-source and proprietary solutions to suit any requirement.
Boot Loaders

MIPS develops and manufactures the SysProbe with support for MIPS (E)JTAG and cJTAG serial protocols. The probes support all the latest MIPS cores in the MIPS32, MIPS64 and microMIPS families.
Debug Probes

MIPS collaborates with open-source and commercial partners to provide MIPS support for many of the popular Real Time Operating Systems (RTOS) and the new generation of IoT specific operating systems. In addition, MIPS has developed the MIPS Embedded Operating System (MEOS) with Virtualization extensions that targets deeply embedded applications and the IoT space.
MIPS RTOS and IoT support

Codescape for Eclipse is a complete software development environment that provides a fully functional C and C++ Integrated Development Environment based on the popular Eclipse IDE platform.

MIPS offers open-source and commercial software simulator packages. These simulators can be extended and integrated with other technologies to form a complete heterogeneous simulation environment. All MIPS simulators are carefully verified to be architecturally compliant.
Simulators

Linux on MIPS provides a complete Linux system for MIPS based processors, with support included in the Linux kernel and distributions including Debian, OpenWRT, Buildroot, Yocto and GENTOO.

The MIPS emulator can be built from the Android Open Source Project releases by Google.

There are hundreds of codecs and stacks that have been optimized for MIPS. Here is information on some of the most popular ones.
Multimedia Stacks