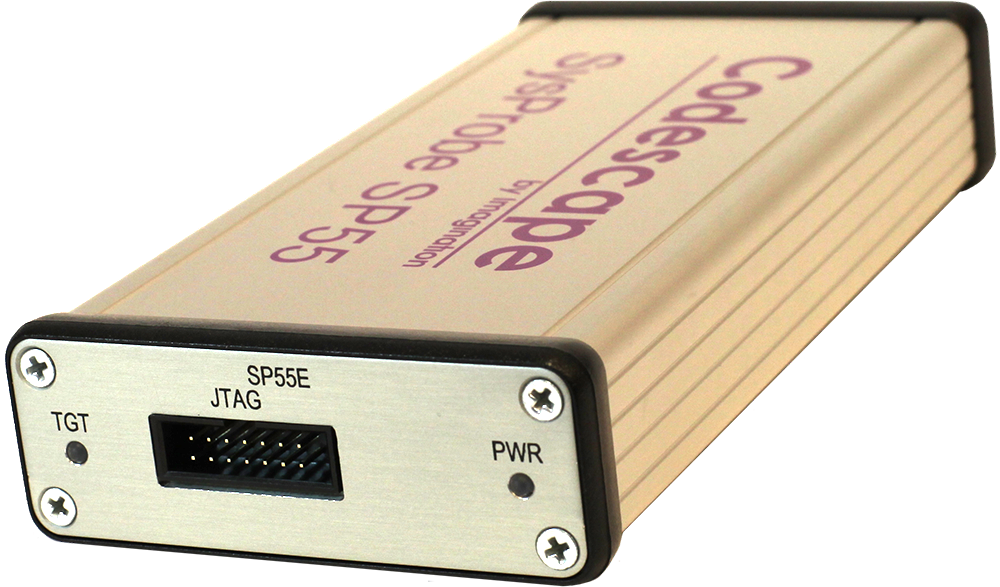 The SysProbe SP55E typically connects to the target system using a 14-pin debug connector but it has the flexibility to adapt to different debug connectors and protocols. The debugging software is cross-platform and runs on Windows®, Linux®, or OS X® computers, communicating via USB 2.0 or up to 1Gb Ethernet.

At the heart of the probe is a powerful MIPS processor running Linux to give the highest debug performance.

MIPS cores support on-chip and off-chip trace depending on the system options configured by the chip designer. The SysProbe SP55E hardware and software supports trace execution history captured in an on-chip trace buffer and accessed over the Test Access Port (TAP). Trace can selectively include load/store address, load/store data, and processor mode and exception information. The trace output can be filtered to focus on specific types of information to most effectively solve a debug problem. Two other SysProbes from MIPS, the SP55ET and the SP58ET, support off-chip iFlowtrace and off-chip PDtrace (program and data trace).

MIPS supplies an advanced scripting and command-line console, Codescape Console, that enables direct access to the SysProbe SP55E from the host PC without using the Codescape Debugger user interface. This provides an ultra-low-level, non-intrusive, scripting layer that is ideal for target bring-up. It allows performance of tasks such as reading and writing memory and registers, or manually controlling JTAG signals, with a predictable impact on the target. Codescape Console is based on the popular Python programming language and is fully configurable and expandable. Chip and hardware designers can create powerful routines for verifying their SoC designs for regression and hardware-level verification. End users can write loadable functions to automate initialization sequences (e.g. for peripheral setup), before boot code has been developed.